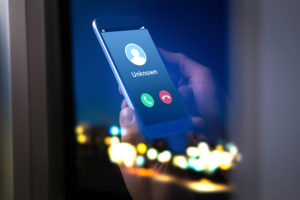 We are all a little afraid of the taxman. He uses language, rules and calculations that most of us don’t understand, and he has strange powers, including the ability to make our money vanish.

Reports are emerging of a new breed of scam that is using our fear of the taxman to steal from us.

Preying on the vulnerable

It looks as though the scammers are, as usual, looking for the most vulnerable and targeting the old and financially inexperienced.

HMRC scams started off with emails, which informed the (unnamed) recipient that they were due a rebate. They would ask for bank details by return of email, or in some cases, on a web page, which might appear to be part of the HMRC site.

Most were obvious attempts at phishing (stealing personal and account details) as they contained poor spelling and grammar. Attempts were made to make them look more genuine, but most still suffered from a lack of personal details which marked them out as fraudulent.

Some scammers tried the same approach with letters. However, these are costly to produce and potentially traceable. They have progressed to telephone scams.

They have also progressed from offering rebates to attempting to intimidate people into making an immediate payment.

They typically leave answerphone messages stating that HMRC is filing a lawsuit against the recipient of the call and states that they should “press 1 to speak to a caseworker in order to make an immediate payment”.  This is of course a scam. HMRC can and do make phone calls to taxpayers from time to time, but they would have sent detailed written communication first.

Even more disturbing is the latest addition to the scamming repertoire where someone claiming to be from HMRC (or the ‘tax office’ or similar) will demand immediate payment, and not take no for an answer. This can be very intimidating, complete with threats of immediate prosecution and bailiffs if the money is not received.

The key to dealing with this type of attempt is suspicion. If the caller cannot quote details of your tax code, your UTR/NI number, address and other details specific to you they are certainly a fraudster. If they are attempting to make you pay for tax arrears that they will not explain, they are just as certainly a criminal out to steal from you.

Help from the real taxman

HMRC are aware of the growth of this scam and can provide some advice.

They say that if you are in any doubt about a caller who claims to be talking about tax – whether they are demanding money or offering a rebate, ask for their name and details, including their phone number. Break off the call.  Then visit HMRC’s website and locate the official telephone number directly, not the number left by the caller or your answerphone. Ideally use a different phone. The fake caller could have kept on the line.

If it was a scammer, HMRC should be able to put your mind at rest, and the number the scammer has provided could help track them down.

For advice on reducing your legitimate tax bill, it pays to talk to an expert. At Continuum, we can provide the help you need.

The FCA do not regulate tax planning.