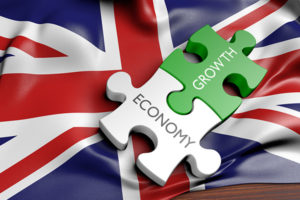 The Financial Times started the business year with a touch of gloom on Tuesday. Their lead article suggested that the UK’s economy will slow in 2018 as business investment remains on hold, interest rates creep up further and indebted consumers curb their spending.

What exactly does this mean for the economic outlook of the UK – and for your own?

The background on the economy

The Financial Times took a poll of more than 100 leading economists. The majority agreed that inflation would start to reduce in 2018 and that there will be a further 0.5% point rise in the Bank of England Base Rate.

We are not looking at recession. There will be some growth in the economy. In November, the Office for Budget Responsibility forecast 1.5% growth for 2017, and 1.4% for 2018. The latest consensus for 2018 actually looks a little better at 1.5%.

But most economic experts feel those figures are disappointingly low. The historic average rate for growth in GDP in the UK is 2.5%, according to Bank of England figures.  The UK is underperforming and lagging behind most of the rest of Europe as well as other developed economies. While conditions for investment have started to improve globally, business investment in the UK seems to be grinding to a halt.

The blame can of course be levelled at Brexit. Although the discussions have at last moved on to the second phase of negotiating a transition period after Britain leaves the bloc and a future trade relationship, the outcome of those discussions are still far from clear. Of course, a close trading relationship with the EU is the most desirable outcome for all concerned. The key questions for businesses looking at the future are whether those involved in negotiations can deliver it, and the precise form these arrangements will take. There is very little point, for example, in a car manufacturer building a new factory in the Midlands if there is a tariff barrier that prevents vehicles being sold across the Channel.

On the positive side

There are however some positive aspects to the current situation. Unemployment is low, and it could get lower still if large numbers of European workers decide to leave the UK.

Trade looks as though it could be especially positive, with some economists forecasting that stronger global growth and the continuing weakness of the pound will help to improve the UK’s trade balance in 2018.

What are the effects on your money?

Slow growth in the economy usually leads to slow growth in income, whether from employment, or from investments. High levels of debt could hold back consumer spending, meaning that there could be a slight risk of falling house prices.  The risk could be increased if bank rates see another hike.

Your money will need to work hard if it is to bring in the kind of growth you want. It may be worth looking at your investment plans, and perhaps considering whether you could enjoy greater growth in overseas markets.

The views voiced in the FT Survey are mixed. The fact is, even the brightest and best economists cannot see the future, as their predictions for the same survey in 2017 showed. Nearly half expected growth somewhere between 1.1 and 1.5% when it was actually higher, unemployment fell, rather than rose and international waters were calm.  2018 may contain some financial surprises, but it probably will not be all doom and gloom.

With some expert advice and prudent planning, we may still be able to look forward to a prosperous new year. If you would like to discuss your own financial future, please contact us at Continuum.

Bank of England – Why does economic growth matter?