Are we heading for a No-Exit Brexit? 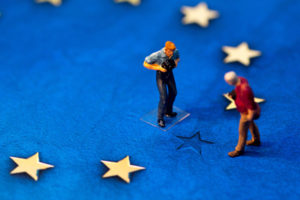 Britain is due to leave the EU on 29 March 2019. The problem is that despite some recent apparent breakthroughs in negotiations nobody yet knows how leaving is actually going to work.

For a while, it looked as though Mrs May’s team were making progress, thrashing out various compromises, based around the idea of leaving the single market and the customs union. Unfortunately, it looks as though those ideas may be impossible to turn into reality.

What is a customs union?

A customs union is when countries apply the same taxes on imports from outside the union. This makes internal trade simpler. When goods have cleared customs in one country, they can be shipped to others in the union without further duty or tariffs.

Unfortunately, it means that individual members of a customs union are unable to strike trade deals with countries outside it.  Getting out of the customs union and having the freedom to become an independent trading nation was one of the main appeals of Brexit for many people.

Some could argue that staying in the customs union is not Brexit at all.

Why can’t we leave?

The trouble is that leaving the customs union is not easy. There is a great deal of negotiation to do and very little time to do it, even with Mrs Mays transition period. The idea of leaving has also been rejected by the House of Lords as impractical and not in the interests of the economy.

There is also the question of Northern Ireland. The open border with the Republic means that there is an open border between the UK and a member of the EU. This is not practical, but neither is any kind of barrier to free trade across Ireland, which would put the Good Friday agreement at risk.

What is being proposed?

Mrs May set out two options for avoiding a hard border with Ireland, while allowing Britain to strike its own trade deals. Under the first, which is thought to be her favoured option, Britain would collect EU import tariffs on behalf of Brussels.

This is a “customs partnership”, which combines UK-EU trade with the UK’s freedom to set its own tariffs. The plan is for British customs authorities to charge British or EU tariffs on goods entering the country and electronically track the progress of those goods to their destination. If the goods end up in a country with a lower tariff, the importing firm would be able to claim a refund for the difference.

The second option is known in Whitehall as “maximum facilitation”.  The UK and EU would share data, with businesses operating as trusted traders. This would allow them to settle duties at regular intervals, rather than every time they moved goods across the border.

Both ideas were rejected during preliminary negotiations in Brussels and by politicians in the province.

Although it may mean a No-exit Brexit, the customs union would at least eliminate the need for checks on goods passing between Northern Ireland and the Republic. Despite this, Downing Street has insisted it will not back down on the policy of leaving the customs union.

“The position remains very clear: we don’t think staying in a customs union is the right thing to do and it isn’t government policy to do so,” a Downing Street source said.

Remainers are seizing on the chance to proclaim any kind of Brexit as impossible. Last minute negotiations look inevitable again.

Brexit is still coming, but the decision on a customs union is crucial to many areas of trade, the economy in general, and your investment plans in particular. Getting out could present some new opportunities – staying in might present many others.

It may be prudent to review your investments in the light of the next round of Brexit negotiations. The Continuum investment team would be pleased to help.